The Apostles Were Writing 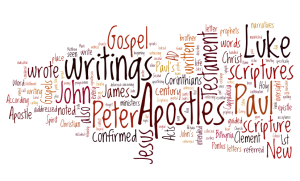 concerning the Word of life — the life was manifested, and we have seen, and bear witness” (1 John 1:1–4). John noted that the Apostles were writing their accounts of the Word, Jesus Christ, for which John recorded that Jesus revealed the Spirit would guide the Apostles unto all Truth (John 14:26; 15:26; 16:12–-13).

All of Paul’s Letters

The Writings of Peter and John

Peter was speaking of the prophetic guidance of John and himself, who did not follow myths, because they were eyewitnesses to Christ and God’s voice from Heaven. Peter declared that Christ’s Spirit guided “us,” Peter and John, as God guided past prophets. Peter included the written New Testament as he spoke of John and himself having “the prophetic words confirmed […] for prophecy never came by the will of man, but holy men of God spoke as moved by the Holy Spirit” (2 Pet 1:19, 21). Therefore, Peter exhorted the nations of the Anatolia that they remember “of the commandment of us, the apostles of the Lord and Savior” (2 Pet 3:2).

In addition to John and Peter, Paul spoke about New Testament Scriptures. In 1 Timothy 5:18, Paul quoted “Scripture” including Deuteronomy 25:4 and Luke 10:7. He equated the New Testament text’s origin with the divine origin of the Old Testament Scriptures. In addition to this, Paul wrote in 2 Timothy 3:16–17 that every Scripture is God’s breath and profitable for teaching and to make a person complete unto every good work.

Luke’s Gospel also referred to apostolic narratives that were previously written of Jesus’s life. Luke reported that he intended to write “just as those who from the beginning were eyewitnesses and ministers of the word” (Luke 1:1–3, ASV). As indicated by 1 John 1:1–4, these witnessing ministers were the Jesus’s apostles who wrote the narratives that Luke mentioned. The Gospels of Matthew, Mark, and possibly even John were these apostolic narratives. Furthermore, Luke wrote Acts and referred to his own gospel as “the former account” and a continuation of his gospel (Acts 1:1).

As noted, the New Testament canon consisted of the apostolic writings of the Gospels, Acts, all of Paul’s writings, John’s writings, and Peter’s epistles. Jame and Jude are the only two writers lacking a specific reference. James, the brother of Jesus, wrote an epistle with the Apostles in Acts 15. James also wrote his epistle about this time while being in direct fellowship with Peter, John, and Paul (cf. Gal 1:19–2:10). Jude, who is also Jesus’s brother and a close associate of the Apostles, confirmed the fulfillment of 2 Peter 2 (cf. Acts 1:14). Both James and Jude’s writings are in agreement and fellowship with the Apostles as the early churches accepted these writings.

The Collection of Christian Scriptures

The apostle Paul wrote to more than those to whom his writings were specifically addressed. Paul wrote his first letter to the Corinthians and addressed to “all who in every place call on the name of Jesus Christ our Lord” (1 Cor 1:2; cf. 2 Cor 1:1). Paul urged the Church at Colossae to exchange writings (Col 4:16). Paul addressed his writings to those he wrote and to everyone who received them.

No reason exists to think that any of Paul’s inspired writings were lost. The Colossians were to receive a letter from Laodicea while the Laodiceans would have received Scriptures that were not nominally addressed to them. Another of Paul’s letters on this trade route was Ephesians. Some also presume another letter to the Corinthians exist prior to Paul writing 1 Corinthians. However, the only evidence of such a writing is assumed by Paul’s reference to writing the Corinthians in 1 Corinthians 5. However, the word “write” appears twice where both are in the undefined aorist tense (1 Cor 5:9, 11). In 5:11, Paul referred to the letter that he is writing, but someone presume that verse 9 is not. The simplest answer is that Paul referred to writing the letter that he was presently writing in 1 Corinthians 5.

By the providence of God to preserve God’s written Word, New Testament Christians do not doubt the infallibility and preservation of Jesus’s words. Jesus taught that He would send scribes and He did (Matt 13:52; 23:34). In the synoptic Gospels, Jesus declared, “My words will not pass away,” and these words have not (Matt 24:35; Mark 13:31; Luke 21:33). Those words are found and confirmed by witnesses in no other place than in the New Testament Scriptures. According to John’s Gospel, Jesus gave the words of God the Father to the Apostles (John 15:20; 17:8; Acts 1:2). Jesus also prayed for all who would hear the Word by the Apostles (John 17:20-–21). Christ told His Apostles that the Holy Spirit would guide them into all truth (John 16:12–13; cf. 6.63; 12:47–48; 15:20). The Apostles and prophets wrote the New Testament Scriptures, and their acceptance as Scripture was known by the early churches of Christ.