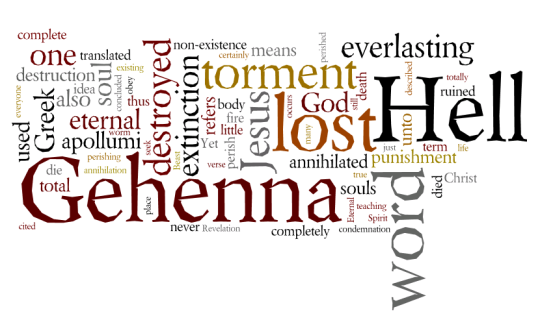 The church leaders rebuked him for false teaching and removed him from his preaching position, because he taught what few others believed that Hell is not eternal torment. In 2012, the movie, “Hell and Mr. Fudge,” depicts the “true story” of a preacher who was paid by an opponent of eternal torment in Hell to challenge the idea that Gehenna is an everlasting torment. The preacher, Edward Fudge, concluded that torment in Hell was not eternal. Was Mr. Fudge right about Hell? Are lost souls totally obliterated in Hell and there is no eternal suffering?

Destruction of Body and Soul

What did Jesus mean that body and soul could be destroyed in Gehenna (Matt 10:28)? Many use these words of Jesus as an anchor for doubting the eternal condemnation of Gehenna — or “Hell.” Rather than Hell being the place of everlasting torment, some have deduced that Gehenna fire destroys lost souls into nonexistence. Eternal torment in Hell does appear as a just sentence to many people. Should such perceived injustice compel believers to reconsider Jesus’s teaching about Hell?

In Matthew 10:28, Jesus taught that God will destroy the soul in Gehenna (cf. Matt 5:29–30). The Greek word translated “destroy” is apollumi. The word is most often translated “lost,” “perished,” “ruined,” or partially “destroyed.” The following study is for a brief observation of how the New Testament uses the Greek word apollumi. This post cites every verse where this Greek word occurs following this sentence.

The Misconception of Annihilation

The Greek word apollumi for “destroy” is the only Greek word translated “lost.” Interpreting this word only as “annihilation” or “extinction” would eliminate the word “lost” from the New Testament. Furthermore, interpreting the word as “annihilate” is preferential and would dismiss the general meaning of the word, its flexibility, and its context. For instance, apollumi describes the state of gold when burned with fire (1 Pet 1:7).

What would be the results of such an overall interpretation that lost mean annialated to extortion?

No Scripture Teaches Annihilation in Hell

This word does not mean “complete extinction” or “total annihilation.” The spirit of the unsaved soul lives in a ruin state. However, are there any scriptures that demonstrate that apollumi means destruction into nonexistence? This simple observations of these scriptures reveal that there are no such passages. The scriptures use the same word apollumi for “perish” or “death.”

Every verse has now been cited where apollumi appears in Scripture. Not one reference implies the soul is totally and completely annihilated into no longer existing. The idea of the soul’s extinction in Hell is a mistaken position supported by those who do not understand the justness of eternal torment and the severity of sin that eternally separates souls from God and thus results in fiery torment (2 Thess 1:7–9).
When Jesus spoke of “eternal punishment,” He was not referring to a one time punishment of a soul burning into extinction (Matt 25:41). If this is true, then Jesus’s reference to “eternal life” in “the kingdom” may include a one-time event before being dissolved into God (Matt 25:46). In Revelation, God punished those who worshiped the Beast and received his mark with everlasting destruction where there was no rest day or night in torment forever (Rev 14:10–11). These souls were not annihilated, because they had no rest in eternity. The souls of the Beast (rulers of Rome) and the False Prophet were also sent into eternal torment, and later Satan also went into the Lake of Fire for eternal torment (Rev 14:9–10; 19:20; 20:10).

With the extent of torment established for all of these, what will happen to everyone else who dies lost and separated from God? John’s Revelation says that God will cast everyone not written in the Book of Life into this Lake of Fire (Rev 20:15). However, God does not punish everyone the same in Hell (Luke 12:47–48). Gehenna consists of torment as Jesus observed, “there will be wailing and gnashing of teeth” (Matt 13:49–50). Jesus described torment as the place where a person will thirst in darkness, yet that person is able to see and remember one’s past life (Luke 16:19–31).

Jesus described Gehenna as a “the everlasting fire” “that shall never be quenched” where the “worm does not die” (Matt 18:8; cf. Isa 66:24; Mark 9:43–48; Rev 21:8). Why is Gehenna fire everlasting and a place where the worm does not die if it is only a temporary punishment? Why are there “everlasting chains of darkness” in Gehenna if this place is only temporary (2 Pet 2:4; Jude 6)? Are these eternal restraints for those who are annihilated? No. These reveal eternal depictions of Hell as eternal torment.

The Justness of Eternal Condemnation

Eternal condemnation is just for those who profane Christ and God’s image. Observe the severity of sin in Hebrews 10:26–29,

For if we sin willfully after we have received the knowledge of the truth, there no longer remains a sacrifice for sins, but a certain fearful expectation of judgment, and fiery indignation which will devour the adversaries. Anyone who has rejected Moses’ law dies without mercy on the testimony of two or three witnesses. Of how much worse punishment, do you suppose, will he be thought worthy who has trampled the Son of God underfoot, counted the blood of the covenant by which he was sanctified a common thing, and insulted the Spirit of grace?

How can God give such a punishment to those who cannot know Christ? As for children and those of like mental state, God does not (Matt 18:10; 19:14). However, God is not far from anyone in any nation. Every person can find Him (Acts 17:26–27). Everyone can see God’s eternal power and deity by what is made in the creation (Rom 1:18–21). Everyone has a God-given moral conscience that compels them to repent (Rom 2:1–10, 14–16). Everyone is able to obey the gospel, because Christ noted that those who seek will find (Matt 7:7). Gehenna is justly eternal torment. God will not completely exterminate souls in Hell. A punishment of “everlasting destruction from the presence of the Lord” is coming for those who do not know God and do not obey the gospel (2 Thess 1:7–9).

If you are still questioning how Hell is just, please read “What Does Jesus Say about Hell Being Just and Eternal?” If you are wondering how a biblical student like Edward Fudge could conclude that Hell is annihilation and not eternal torment, then consider someone misunderstanding the justness of Hell, having an incomplete study of apollumi, and misusing Greek lexicons to prefer a single connotation over the denotation. With good intentions, a person can accept such a fallacious understanding, but such a study is not diligent enough to produce truth and the consequences are eternal.

May God bless you in your study of His Word.

21 thoughts on “Are Souls Annihilated in Hell?”